Luminaires of conventional industrial line lighting often use control protocols such as Dali and KNX. It is a user-friendly application with which the user has extensive options such as daylight control and the ability to dim lighting. DATALUX light line systems are also suitable for these protocols,  but operate without dedicated drivers installed.

Dali systems are usually controlled via a Dali bus. This bus forms the interface between the user and the various control options of the connected luminaires. DATALUX light lines are built around the concept of continuous light. Each line in which a number of DATALUX luminaires are connected acts as one lighting system. Control and/or dimming per luminaire, whether or not with Dali integrated, is therefore not necessary and desirable. That is why manufacturer LUMINAID chooses not to provide DATALUX luminaires with the Dali protocol. However, every DATALUX light line system can be controlled intelligently by means of the standard 0-10 V control standard available in each DATALUX system. 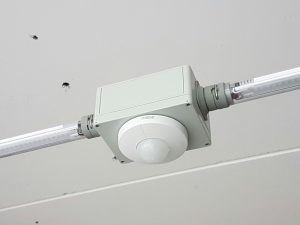 DATALUX systems can also be easily connected to Dali or KNX systems. When the intelligent PIR tronics are applied, even a self-steering system is realized whereby parts of the line, but also parts of the entire light line system, can be switched off or (temporarily) dimmed. This is often simply connected to a central Dali or KNX bus, equipped with a 0-10V output and also other lighting such as the offices.

LUMINAID light experts are happy to advise on the wide range of applications. Interested? Contact us via www.luminaid.eu/contact